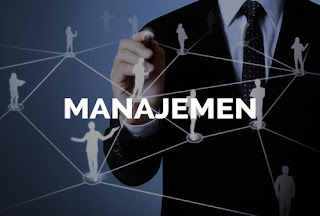 Every activity anywhere and anything involving people and need cooperation, whether it is activities that are profit oriented or non profit oriented, must be loaded with management, as well as manage, the organization (the company) , organizations or sports associations and so on, whether its management is FORML, modern or traditional because of the core pattern of managements it is to manage, how to manage, what is set and who set it, then for what it is regulated.

1.2. Formula problems
1. What is management’s understanding?

2. What are the management functions?

3. Mention the types of management!

4. What is the form of management skills?

5. Explain the development of management theory!

1.3. Purpose
1. To know its management and understanding

2. To know the management functions

3. To know the types of management

4. To know the management skills

5. To know the development of management theory

The word management comes from the Old French ménagement, which has the meaning of performing and organizing art. Management has not yet had an established and universally accepted definition. The word management may come from Italian (1561) Maneggiare which means “to control,” especially “controlling horses” that come from Latin manus with “hands”.

This word gained influence from the French le meaning “possession of horses” (derived from the English meaning art of controlling horses), in which the English term is also derived from Italian. The French language then adopted the word from English to ménagement, which has the meaning of performing and organizing art.

Mary Parker Follet, for example, defines management as the art of completing work through others. This definition means that a manager is tasked with organizing and directing others to achieve organizational objectives.

Ricky W. Griffin defines management as a process of planning, organizing, coordinating, and controlling resources to effectively and efficiently achieve goals. Effective means that the objectives can be accomplished according to the planning, while efficiently means that the existing task is executed correctly, organized, and in accordance with the schedule. The term of management, translation in Indonesian until now has no uniformity.

Ø organizing (organizing) is the stipulating where the decision will be made, who will carry out the duties and the work, as well as who will work for whom

Ø leading (leading) is inspiring and motivated to employees to strive to achieve the objectives of the Organization.

Ø controlling (controlling) is overseeing the progress of achieving the target and taking corrective action when needed.

Four types of managers with different occupations and responsibilities, among others:

The top manager holds positions such as the Executive leader (CEO) and the operations Leader (COO) and is responsible for all directions in the organization. They are responsible for creating important conditions for change as well including shaping the vision and long-term mission for the company. Top management is also obliged to help employees build a sense of responsibility to the company. In addition, the top managers are also responsible for creating a positive organizational culture through language and action, as well as caring for their business environment.

The intermediate managers hold positions such as the factory manager, Division manager, and regional manager and are responsible for setting goals that align with the plans and objectives of the Top Manager, as well as establishing the strategies used to Reach the goal. They are also responsible for coordinating and linking all departments and divisions in the company. The intermediate manager oversees and manages the performance of sub-units and first-line managers. In addition, they are also responsible for implementing changes or strategies created by Top Manager.

First-line managers held offices such as office managers, shift supervisors, and department managers. They manage the performance of basic employees. Line managers also create detailed schedules and operation plans based on medium-term planning of intermediate-level management. They also train and supervise the performance of non-managerial employees and are directly responsible for the production of goods or services.

From the management level discussed above, each level of managerial must have the necessary skills in carrying out their respective duties in different portions. In this case the manager must have three skills as follows:

TOP managers should have the skills to create concepts, ideas, thoughts, and suggestions for organizational advancement. Then the idea is described as a concrete plan of activity. The description process of the idea into a plan of work is referred to as planning process. This concept skill is indispensable for managers at high levels. The higher the level of managerial, the more these skills will be required.

Humanitarian skills or more well-known interpersonal skills are skills that are often ignored by managers, especially for managers who are just riding their own crimes in organizations . This humanitarian skill is necessary to maintain good relations with direct and subordinate superiors. With the communication into will make the subordinates feel appreciated and they will work better and be more open to the superiors. These communicating skills are required both on upper, intermediate, or lower level of management.

This skill is a provision for managers at the lower level. This technical skill is the ability to run a certain job for example repairing machines, making seats, creating work schedules and other technical skills.

There are two management figures that initiated the scientific management, namely Robert Owen and Charles Babbage. In the early 1800 ‘s Robert Owen, a cotton spinning mill manager in New Lanark, Scotland, emphasized the importance of human elements in production. He made improvements in working conditions and developed a number of work procedures that were possible in increasing productivity. Charles Babbage, a mathematics professor from England, was the first advocate of a division of working principles through specialization. Each workforce should be given skill exercises that correspond to each factory operation.

The classical management flow was characterized by contributions from Frederick Winslow Taylor, Frank and Lillian Gilberth, Henry L. Gantt, and Harrington of Emerson. Here will only be discussed scientific management by F.W. Taylor.

A) The development of actual scientific management

b) Scientific selection for employees

This flow emerged because of dissatisfaction that the classical approach did not fully produce production efficiency and work harmony. Managers still face difficulties and frustration because employees don’t always follow rational patterns of behavior. So the discussion of ‘ human behaviour in the organization ‘ is important.

One of the characters in this neoclassical stream is Elton Mayo (1880 – 1949). ‘ Human relations ‘ is often used as a generic term for describing the way that managers interact with their subordinates. To create a good human relationship, the manager must understand why employees act as they do and what social and psychological factors motivate them.

Elton Mayo and his assistant conducted a study of human behaviour in various very well-known work situations in Westrn Electric’s Howthorne company from 1927 to 1932. Mayo found that special attention (such as the chosen feeling of being a participant in the study of top management) severely influenced their efforts. This Phenomena is known as Howthorne effect. Another invention is that the informal group of KEJA – the social environment of the employee – also has a major influence on productivity.

Modern management period develops through two different paths. The first is the development of a human relationship stream known as organizational behavior, and the second is built on the basis of scientific management, known as quantitative flow. The development of organizational behavior flows is characterized by new views and opinions on human behaviour and social systems. The characters are Abraham Maslow, Douglas McGregor, Frederick Herzberg, and others.

1. Management is a process of planning, organizing, leadership, and controlling the efforts of member organizations and using all organizational resources to achieve the objectives that have been established.

3. The development of management theory is divided into three schools of thought: