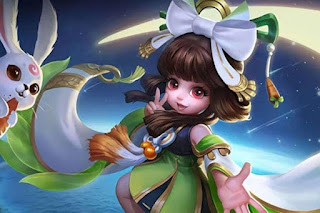 Passive: Lucky Bunny, Chang’e gains a blessing from her rabbit after each successful skill she casts, reducing the cooldown of her skill for a short period of time. (This blessing takes effect when skills are cast again). This effect can be stacked.

Skill 1: Run, Rabbit, Run!, Chang’e summons a group of rabbits to the target area. dealing magical damage to enemies they pass and reducing their movement speed. (Damage dealt by rabbits will decay when hitting the same target.)

Skill 2: BIU!BIU!BIU!, Chang’e continuously launches three energy balls forward. which deal magical damage to the first enemy unit they encounter. If all three energy balls hit the same unit, the target will be stunned. The same target can only be stunned once every few seconds. Passive: Each energy ball can devour an enemy’s basic ranged attack once, increasing the balls damage.

Ulti: Bunny Bomb, Launches a rabbit missile forward. which deals magic damage to the first enemy hit and then immediately splits into six small missiles that continue chasing the target. Each missile deals magic damage (each consecutive missile hit deals less damage). If the rabbit missile flies its full distance without hitting a target, it will split into 6 smaller missiles and randomly chase the nearest enemy unit.