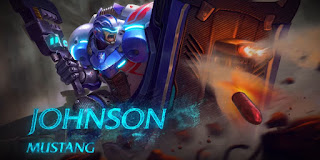 Electro-airbag, When the hero’s HP lower than 30%, a shield will generate, absorbing an amount of damage based on his armor. Lasts 10s. This effect only can be triggered once within a period of time.

Johnson’s passive is a strong defensive ability.  It makes Johnson a better tank of absorbing Physical damage based on Armor. HP can easily get less than 30% in the late game for tanks. Johnson can survive more Physical attack damage from many Marksman and continue to tank more damage in team fights.

Iron Sack, Upgrades the pliers. Next basic attack will deal 200 pts of magic damage plus an extra damage that equals 1.5 times of the hero’s armor, lowering the enemy’s movement speed 60% for 1s. If the target is affected by slowing effect, then they will be stunned for 1s. The same target can only be stunned once every 6s.

The slow effect is very strong for a tank like Johnson, the damage for a tank is considerably average. The movement speed debuff only happens for 1s, although short it allows both the enemy to react or your allies to catch up to kill or deal more damage to the enemy. If the enemy does not have purify after the slow to counter with the stun for another second later on, with enough help the enemy should be dead by this strong Crowd-Control ability of 2s in total.
Skill 2

Missile Tackle, Launches several vehicular missiles forward to track enemies in a cone shaped area, dealing 250 pts of magic damage to them and lowering their movement speed 70% for 2s.

Rapid Touchdown, Passive: Increases 10% of armor. Active: Johnson jumps up and transforms into a car, which will accelerate increasingly. One teammate can get in the car when it stops and then rush forward along with Johnson. When the car hits the first enemy, it will explode and stun the target and nearby enemies for 0,75-1,5 seconds and according to the car’s running speed, deal 300-600 pts of magic damage to them.

Johnson’s Ultimate may be one of the strongest Global Ultimates in the game for tank/support heroes. Johnson builds a strong increase in armor, charges up for about 3s before moving and reaching to full speeds that essentially allows him to travel anywhere in the map and across to any location desired. Given his Ultimate, he has the ability to quickly navigate to key places in the Jungle, early and late game and obtain objectives or steal objectives from the enemy or secure objectives for the team. Such objectives include The Lord and The Turtle. The Ultimate has extremely high damage and considerably strong stun duration, allowing enough time for stealing the Lord with Retribution or providing enough Crowd Control for allies. However, for the full effect of damage and stun duration, he has to travel a considerable distance which is sometimes very difficult.