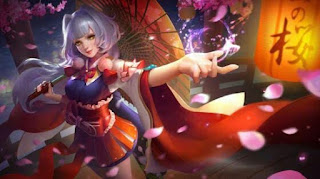 Yin Yang Gathering
Passive
When the Qing Ming Umbrella and the hero become as one, generates a shield absorbing 300 pts of damage and stuns nearby enemies, slowing them down. This effect can only be triggered per 3.5s at most.

Skill
Cooldown: 5
Mana Cost: 50
Moves Qing Ming Umbrella to the designated area, dealing 330 pts of magic damage to the enemies along the way and lowering their movement speed by 50%.

Rasho Umbrella Flee
Skill
Cooldown: 12
Mana Cost: 80
With Seimei umbrella: releases the hero from any movement-imparing effects, moving to the specified direction and leaving the umbrella on the spot. Without Seimei Umbrella: moves to the umbrella and deals 205 pts of magical damage to the target enermies.

Yin Yang Overturn
Skill/Ultimate
Cooldown: 40
Mana Cost: 65
With Seimei Umbrella: deals 400 pts of magical damage, knocking back the nearby enemies and slowing them down. Without Seimei umbrella: generates a link with the umbrella in 6s, and refresh the skill Seimei Umbrella Open immediately, dealing damage to any enemy that it touches and slowing them down, dealing 430 pts of magical damage to the 1st enemy it touches.
0
Share

Lyrics 2AM – I Did Wrong (잘못했어) + Translation